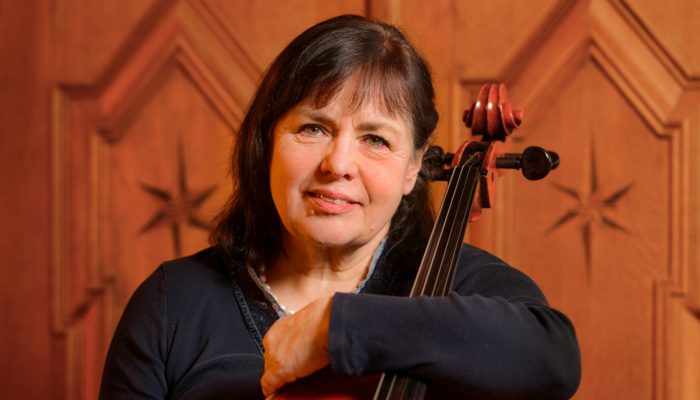 Barbara Lübke-Herzl, born in Wiesbaden, completed her cello studies in Würzburg, Freiburg and Düsseldorf with JOHANNES GORITZKI and then at the legendary AMADEUS QUARTET in Cologne.

Already 18-year-old solo cellist in the KÖLNER KAMMERORCHESTER, with whom she undertakes numerous tours throughout Europe and America.

1978 Appointed by SANDOR VÉGH as a solo cellist to the CAMERATA SALZBURG, shortly after joining the PRO ARTE QUARTET, with which she has an international career. Extensive concert tours took this ensemble 20 years to the most important concert podiums and chamber music festivals in Europe: Vienna, Budapest, Paris, London, Athens, Berlim uva

1989 tour through Israel, 1991 debut at the SALZBURGER FESTSPIELEN, performances at the MOZARTWOCHE SALZBURG, and in the large hall of the WIENER MUSIKVEREIN. RAPHAEL KUBELIK dedicated his 5 string quartet to the PRO ARTE QUARTET.

An exclusive contract with RCA VICTOR-BMG with a complete recording of all Mozart quartets confirms the rank of the ensemble. Since the year 2002 Barbara Lübke-Herzl plays in various chamber music formations and undertakes concert tours to Japan, Taiwan and Korea. She is the chamber music partner of renowned musician colleagues, of whom Benjamin Schmid, Vladimir Mendelssohn, Sabine Meyer, Eduard Brunner, Hermann Baumann and Julius Berger are named. 2001 intensified her teaching activities for Barbara Lübke-Herzl and today leads a large, highly motivated cello class in Salzburg - in addition she is a regular lecturer at the INTERNATIONAL SUMMER ACADEMY MOZARTEUM, the AUSTRIAN MASTER CLASSES and the master classes of the MUSIKTAGE SEEFELD.

Many of her students are outstanding winners at YOUTH MUSICIANS and PRIMA LA MUSICA.

Since the winter semester 2015 / 16 she is a lecturer of the PRE COLLEGE at the UNIVERSITY MOZARTEUM.