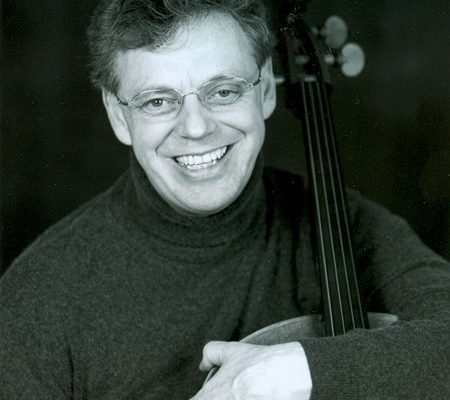 For more than 40 years, the cellist born in Augsburg has become an indispensable part of musical life. And not only because he is a wonderful interpreter, the Frankfurter Allgemeine Zeitung after his second recording of the cello suites by Bach called a "prophet of the cello" (W. -EvLewinsky). Julius Berger enriches the music world in many ways, as an interpreter, pedagogue, discoverer, thinker who does not love "trodden paths".

Formative teachers Bergers were in Munich Fritz Kiskalt, in Salzburg Antonio Janigro, whose assistant he was for several years and in Cincinnati (USA) Zara Nelsova. He had close contact with Mstislav Rostropovich, where he studied first and with whom he later gave numerous concerts.

Julius Berger owes important impulses for his artistic life to the collaboration with Leonard Bernstein, Olivier Messiaen, Sofia Gubaidulina and Gidon Kremer, who invited him many times to his chamber music festival in Lockenhaus (Austria).

Julius Berger is in demand worldwide as a soloist and chamber musician, has recorded numerous CD's and trains top newcomers. Many of his former students are already working as professors or solo cellists in renowned orchestras such as the Leipzig Gewandhaus Orchestra.

That Julius Berger makes no distinction between the historical and the contemporary, but rather in the spirit of his teacher and friend Mstislav Rostropovich seeks contact with living composers and promotes the emergence of new works specifically through commissions, premieres and premieres certainly belongs to his great merits. Recent examples include works by Sofia Gubaidulina, Franghiz Ali-Zhadeh, Adriana Hölszky, Manuela Kerer, Krzysztof Meyer, Wilhelm Killmayer, Johannes X. Schachtner, Markus Schmitt, Giovanni Bonato, Hong Jun Seo and more. In the year 2014, Julius Berger collaborated with his wife Hyun-Jung premiered the work "Zwei Wege" by Sofia Gubaidulina for two cellos and orchestra at the "Seoul International Festival". The work will be the same cast as a European premiere at the Beethovenfest Bonn 2015.

However, Julius Berger also made a major contribution to the literature of his instrument through the rediscovery and world premiere recording of the concertos and sonatas by Luigi Boccherini and Leonardo Leo as well as the oldest cello solo literature by Gabrielli and delli Antonii. He is also the publisher of most works in exemplary urtext editions.

Most recently, Julius Berger has devoted himself to researching the intellectual background of large standard works by Bach, Beethoven, Brahms and others. In his series "From Idea to Work" at the University of Augsburg, he opens up language, peculiarities and historical references in words and sound. For many years Julius Berger has been artistic director of the festivals in Eckelshausen (Germany) and Asiago (Italy) as well as president of the International Instrumental Competition Markneukirchen (Germany).

In the year 2009 he was appointed a full member of the Academy of Sciences and Literature in Mainz.

Julius Berger seeks relaxation in the mountains of his Allgäu homeland. He is a passionate photographer and author of poems.