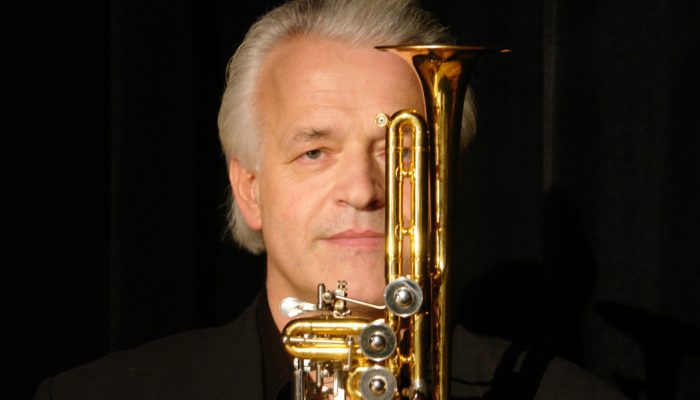 Otto Sauter is known worldwide as one of the leading trumpet soloists. As a specialist on the piccolo trumpet, he has performed in all major concert halls.

The musical talent of the Tengen on Lake Constance born Otto Sauter was promoted early. At the age of four, he received the first trumpet lessons. Already with 16 years he began his studies with Claude Rippas at the conservatory in Winterthur. There he acquired 1984 his teaching and orchestral diploma and a year later the soloist diploma. After graduation, he deepened his studies with Bo Nilsson in Malmö, Sweden and Pierre Thibaud in Paris.

From 1988 to 1998 he was principal trumpeter in the Philharmonic State Orchestra in Bremen. Due to his great dedication in promoting young musical talent, he brought to 1991 the annual International Trumpet Days Bremen, one of the leading brass festivals in the world, with concerts by Ray Charles, Maurice André, Montserrat Caballé, Clark Terry, Maynard Ferguson. 1994 founded the International Trumpet Academy Bremen, a unique educational model for the most talented young trumpet players from around the world. Otto Sauter is a busy teacher at international universities. 1988 he was appointed to the College of Arts in Bremen. 1995 has given him the Toho Gakuen School of Music in Tokyo and the Universidad Metropolitana de Santiago de Chile Guest Professorships.

Otto Sauter is one of the most sought-after soloists on the piccolo trumpet. In December 1995 he played with the Philharmonia Orchestra London at St. James Palace in the presence of the host Prince Charles. 1998 he guested on the occasion of the founding of the "German Society for the Restoration of Vatican Art Treasures" in the Vatican. There he played 2000 in August before Pope John Paul II and 50.000 audience visitors accompanied by the Philharmonia Hungarica during the "Festa Musica Pro Mundo VNO". Since the spring of 2001, he is a regular guest in his own cycle of sacred music "Elevazione Spirituale" in the Vatican. In April 2001, he performed in the "Forbidden City" in Beijing, accompanied by the China National Symphony Orchestra under the direction of Muhai Tang.

In honor of the 50 anniversary of UNICEF Germany, he has initiated a series of concerts for 2003 in Germany's most beautiful churches and cathedrals, as well as the opening gala of the Schafhof Festival for UNICEF by Ann Kathrin Linsenhoff, the former World Champion and Olympic gold medal winner in dressage. After singing at the Hohentwiel he invites every year great artists such as Montserrat Caballé, Bobby McFerrin, Michael Mendl, Lucia Alibert, Mathieu Carrière, to give for his foundation, the Otto Sauter relief fund, a charity concert.

With the series "World of Baroque" Otto Sauter has started at EMI Classics, recordings of his 600 works comprehensive scores of lost compositions of baroque and early classical masters such as A. Scarlatti, G. Reutter or JM Molter, as world premiere recordings and public including arias with soprano (including Maki Mori) and altus (including Jochen Kowalski).

As a specialist on the piccolo trumpet, Otto Sauter is not only dedicated to baroque music, but also supports the expansion of the repertoire of contemporary original literature for the piccolo trumpet. For example, he commissioned works by Julien Francois Zbinden, Harald Genzmer and Jan Koetsier. 2004 presented three world premieres of works by the Czech composer Juraj Filas, whose teacher was a student of Dvorák, two of them at the Beethoven Festival in Bonn: The Concerto for Piccolo Trumpet and Symphony Orchestra, performed with the Bonn Beethoven Orchestra, by The Bonner Rundschau was characterized as "music as emotionally vehement as Mahler and melodiously as beautiful as Puccini" as well as the "Apassionata" for trumpet and organ.

The year 2008 was dedicated to the premiere of the new trumpet concerto for piccolo trumpet and symphony orchestra by Mikis Theodorakis, written by the internationally renowned Greek composer for Otto Sauter. Sauter himself says of his collaboration with Mikis Theodorakis: "Rarely has a human being so fascinated me, so often moved to tears. Mikis, the man who has suffered so much mischief, but whose life and creative power is unbroken. Mikis, the composer whose music touches millions, thrills, makes happy and captivates - makes him immortal. When I work on Mikis' work, I breathe the scent of the cypresses, I hear the sound of the Aegean, I feel every single note of Mikis Theodorakis ". Sauter presented the work at the Philharmonie in Cologne and Berlin with a world premiere of the Ring (directed by Gert Hof / Arrangement Robert Gulya).

In July 2005, Otto Sauter opened the international choir and music festival "Musica Sacra a Roma" in Rome and the Vatican as Artistic Director. World stars of music, such as the Italian soprano Lucia Aliberti, the Malmö Symphony Orchestra, the organists Michael Schönheit Christian Schmitt and many more, came together with 32 choirs from 20 nations in exclusive festival concerts in the most beautiful and important churches of Rome and the Vatican to set an international sign for world peace and ecumenism. "Musica Sacra a Roma" is under the patronage of His Eminence Cardinal Paul Poupard, President Pontifical Consilium De Cultura, Vatican.

On the occasion of the Mozart Year 2006 he initiated the "Little Amadeus Action Day" at German elementary schools together with the TV producer Peter Will of the eponymous successful TV series. The animated series of KI.KA, ARD and ZDF - has been awarded several times with the "Echo Klassik für Kinder". The project under the patronage of the German Mozart Society aims to introduce children to classical music in an entertaining way. He initiated 2007 as Artistic Director in cooperation with Volkswagen AG Wolfsburg and Deutsche Post AG, the Little Amadeus Live Children's Concert Series. The elaborate stage show with actors, original filmmakers, soloists and symphony orchestra presented itself in around a year in 70 concerts in Germany, Austria and Switzerland, among others at the Deutsche Oper Berlin, the Gewandhaus Leipzig, the Mozarteum Salzburg, the concert halls Dortmund and Freiburg and the Transparent Factory of Volkswagen in Dresden (directed by Joachim Jäckel / screenplay Klaus Wirbitzky). For the first of three planned Little Amadeus movies he recorded the music with the Vienna Philharmonic and Zubin Mehta.

In addition to his solo career, he also caused a stir with his ensemble "Ten of the Best", which unites ten of the world's best trumpeters and with whom he regularly performs successfully on Japan, USA and Europe tours. In August 2001 they opened the Arena AufSchalke, the most modern football stadium of its kind in the world, with a fanfare specially created for this event in front of 70.000 spectators. Highlight 2006 under his artistic direction was the "Playtime Live City Concert Tour", the Germany-wide music festival within the framework of the FIFA World Cup 2006TM, supported by the Organizing Committee FIFA WM 2006. Theo Zwanziger with 16 event concerts from Bremen to Ludwigshafen, from Rügen to Norderney, on prestigious public squares as well as on sites of cultural and historical significance, such as the Saxon State Opera Dresden, Semperoper and the marketplace in the Handel city of Halle. As music projects, Otto Sauter presented "Ten of the Best plus one", which was launched at the request of FIFA with 11 trumpeters, and "The Power of Parsifal", an all-star team of the international jazz scene, both in interaction with the symphony orchestras of the concert cities.

Otto Sauter regularly collaborates with renowned artist colleagues and character actors from the theater genre, whom he invites to present new programs in concerts, at festivals and tours. The programs form a synergy of music and literary texts such as "Casanova: Reunion with a Great Love" with Mario Adorf, "Venetian Christmas" with Michael Mendl, "Heinrich von Kleist: Saint Cecilia or the Violence of Music" with Mathieu Carrière or the "Diaries of Cosima Wagner" with Mareike Carrière.