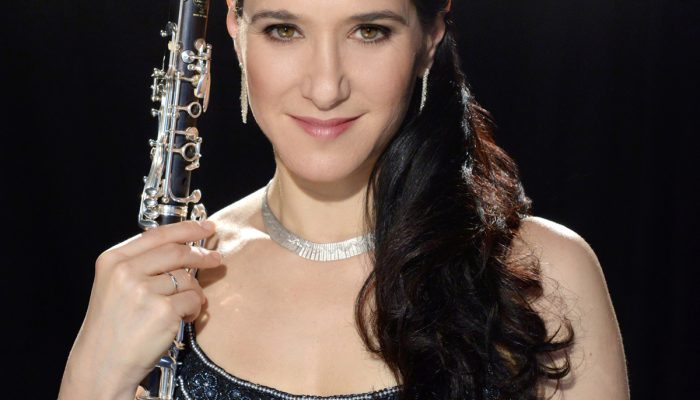 Sharon Kam has been one of the world's leading clarinetists for over 20 years and works with the most important orchestras in the USA, Europe and Japan.

From the beginning of her career, the two Mozart masterpieces for clarinet have been an integral part of Ms. Kam's artistic work: at the age of 16, she played Mozart's clarinet concerto in her orchestral debut with the Israel Philharmonic Orchestra under Zubin Mehta, and shortly thereafter his clarinet quintet with the Guarneri Quartet in New York.

To Mozart's 250. On the occasion of her birthday, she played his clarinet concerto at the Estates Theater in Prague, which was televised live in 33 countries and in the same year fulfilled the wish to record both the concerto and his clarinet quintet with the bassett clarinet. For this highly acclaimed recording, Sharon Kam won the Haydn Philharmonic and four star strings: Isabelle van Keulen, Ulrike-Anima Mathé, Volker Jacobsen and Gustav Rivinus.

Her commitment to contemporary music can be seen in numerous world premieres; among them Krzysztof Penderecki's clarinet concerto and quartet as well as clarinet concertos by Herbert Willi (Salzburg Festival), Iván Erőd and Peter Ruzicka (Donaueschingen).

Through her numerous recordings, Sharon Kam has proven that she is at home in classical music to modern times and also in jazz. She has twice been awarded the ECHO Klassik as "Instrumentalist of the Year": 1998 for her Weber recording with the Gewandhausorchester Leipzig under Kurt Masur and in the year 2006 for her CD with the MDR Symphony Orchestra and works by Spohr, Weber, Rossini and Mendelssohn , The recording "American Classics" with the London Symphony Orchestra under the direction of her husband Gregor Bühl was awarded the German Record Critics' Prize.

2013 followed her acclaimed "Opera!" CD with transcriptions from arias Rossinis, Puccini's to Wolf-Ferraris, for clarinet and chamber orchestra, which she recorded with the Württemberg Chamber Orchestra under Ruben Gazarian. On the occasion of the 100 anniversary of Max Reger's death Sharon Kam released the clarinet quintets of Reger and Brahms with her chamber music partners for the Mozart recording in October 2015.

In the season 2017 / 18 Sharon Kam will again be on tour with these same chamber music partners and their program of Mozart, Brahms and Reger Quintette. She will also perform in Vienna, Paris, Budapest, Munich, Amsterdam, Bern and Calgary, at the Schubertiade and the Schwetzinger Festspiele.